Panetta to speak at NHPCO’s Leadership and Advocacy Conference, March 26

(Alexandria, Va) – A pioneering champion for hospice care in the United States Congress, Secretary Leon Panetta will address participants during the National Hospice and Palliative Care Organization’s (NHPCO) 2021 Leadership and Advocacy Conference on March 26. Secretary Panetta will deliver a live address on Friday at 12:30 p.m. ET during this virtual conference that reaches more than 1,000 leaders and senior managers from across the hospice and palliative care provider community.

“We are so pleased to have Secretary Leon Panetta join us on Friday as a way to honor our beginnings and to honor that work – now almost 40 years later.  Those early days were filled with excitement and urgency as we talked with members of Congress and their staff and convinced fledgling hospice organizations of mostly volunteers that having the Medicare reimbursement would allow hospices to care for more patients,” said NHPCO Vice President for Regulatory and Compliance Judi Lund Person.  “It was also a time before email and common use of computers – so almost everything was done by snail mail and fax.” 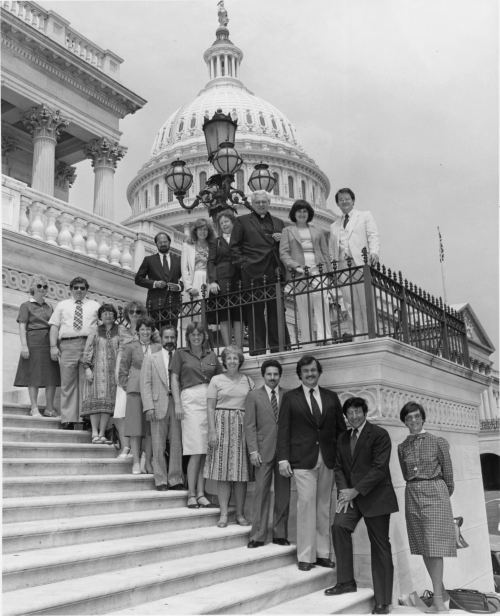 The photo above features advocates from the hospice provider community who worked to support the creation of the benefit and ongoing efforts to advance hospice care in this country (Lund Person is seen third from the left in the top row.)

Added Lund Person, “The group that gathered on the Capitol steps in September of 1982 celebrated the passage of the legislation.  It was an important milestone that led to the establishment of regulations and payment for hospice care under Medicare in the U.S.”

Hospice would not be what it is today without their efforts. Secretary Panetta will share some reflections as we approach the 40th anniversary of the benefit.

NHPCO President and CEO Edo Banach remarked, “We are honored that Secretary Panetta will be addressing the provider community at our conference. His leadership and passion for establishing this new benefit has made hospice care available to millions through the years.”

Secretary Panetta served as White House chief of staff in the Bill Clinton administration. In 2009 he assumed the role as CIA Director and then U.S. Secretary of Defense under President Obama. In 2013, he returned as Chairman of the Panetta Institute for Public Policy, which he founded with his wife Sylvia in 1997.

NHPCO’s Leadership and Advocacy Conference is the premier conference for hospice and palliative care leaders, and safely brings our community together to learn, collaborate. Online registration for this virtual event is open online with on-demand conference content available to participants through May 31, 2021.